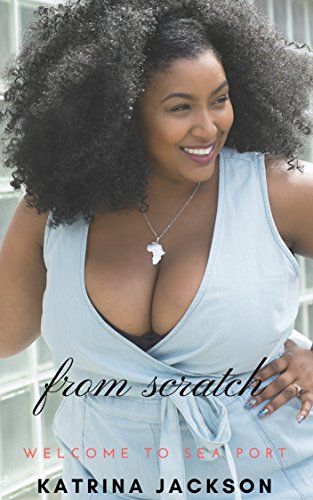 Review: From Scratch, by Katrina Jackson

From Scratch is the sort of fluffy wish-fulfillment I needed this week. The plot is straightforward: three people go to a town called Seaport (not anywhere near the sea) to start over. They find each other and fall in love. The reasons to like this book lie not within a complex plot - they’re with the characters.

The heroine, Mary, is a Black college professor turned baker and she’s been going through some things. She felt a lot of pressure to keep on the tenure track but she just hated it. When she learns that Seaport is giving people low-rate loans and entire shops to encourage them to move to town, she makes the leap to start in on her dream. Mary has a crew of girlfriends back home who keep her encouraged and grounded and it was just a delight to read their exchanges. Women supporting women will always make me cheer for a book.

Knox and Santos were in the military together, with Knox as Santos’ superior officer. Knox, a Black man is from a rough family background, and developed a mask of smiles and politeness to get through his adulthood. Santos is Latinx and came from a loving family. He’s more prickly, though, and liked the structure of the military. He also grew up in the Midwest, in a town with a super racist, corrupt police department. When he moved back home to join the police force, he just couldn’t be part of that. They move to Seaport to take on the roles of Fire Chief and Police Chief after a bunch of research.

Both men are immediately attracted to Mary, but she flirts with them in a way that lets them know she wants them both, not just one. The men open up about their long-secret attraction to each other, and *poof* throuple. The book doesn’t strike me as Gay-for-You since it’s more of a “we didn’t want to risk the friendship” situation for the two men. Neither of them is straight, but they started out their relationship in a power imbalance and since then, they haven’t wanted to chance it. Especially Knox, who doesn’t have much in the way of family.

The book doesn’t spend a lot of time on angst or deliberation. There’s a lot of sex, there’s a lot of baking, and there’s a dark moment that some reviewers said came out of nowhere but that I saw coming. The HEA is as sweet as Mary’s vegan chocolate cake.


Two things that would have made the experience a little better? A copyeditor and a recipe.

Because I know it’s a dealbreaker for some readers: the beginning of the book (and the rest, though less so) needs a copyeditor. I would have enjoyed it much more if not for sentences that were missing words or other errors that spell-check wouldn’t catch, but a copyeditor would.

And really, you’re gonna have me read 220 pages of Mary experimenting to get the perfect vegan chocolate cake and then not give me that recipe? Torture.

You’ve been warned: this is not a book to read without cake on hand.