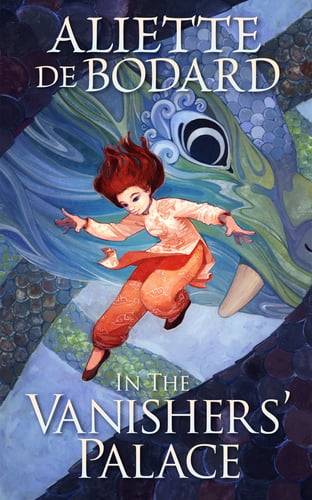 From the award-winning author of the Dominion of the Fallen series comes a dark retelling of Beauty and the Beast.

In a ruined, devastated world, where the earth is poisoned and beings of nightmares roam the land...

A woman, betrayed, terrified, sold into indenture to pay her village's debts and struggling to survive in a spirit world.

A dragon, among the last of her kind, cold and aloof but desperately trying to make a difference.

When failed scholar Yên is sold to Vu Côn, one of the last dragons walking the earth, she expects to be tortured or killed for Vu Côn's amusement.

But Vu Côn, it turns out, has a use for Yên: she needs a scholar to tutor her two unruly children. She takes Yên back to her home, a vast, vertiginous palace-prison where every door can lead to death. Vu Côn seems stern and unbending, but as the days pass Yên comes to see her kinder and caring side. She finds herself dangerously attracted to the dragon who is her master and jailer. In the end, Yên will have to decide where her own happiness lies—and whether it will survive the revelation of Vu Côn’s dark, unspeakable secrets...

Review: In the Vanishers' Palace, by Aliette de Bodard

Yên is not important in her village. Her mother is a healer who knows magic but Yên has no powers herself; all she does is teach the village children but knowing about long-dead scholars isn’t considered important in a devasted world where everyday survival is hard enough.

When another girl – the daughter of a village elder – falls sick and the healing skills of Yên’s aren’t enough to help her, the elders decide to call the dragon and offer Yên’s life in exchange. Much to Yên’s surprise, the dragon doesn’t want to kill or torture her. Vu Côn wants her as teacher for her children. Still, things aren’t easy for Yên. She struggles to deal with the unfairness of her situation, the separation from her mother, Vu Côn’s distant behaviour and living in a palace where a wrong step can mean death.

It’s no new revelation that fairy tales often aren’t very good when it comes to consent. Apart from the often-discussed Sleeping Beauty, there are also rows of kings, promising their daughter to whoever completes a quest – without any mention if the daughter is OK with that. Retellings often avoid this issue by having the couple know – and love – each other already and the prince/tailor/penniless adventurer uses the quest to win over the dad who wouldn’t have agreed to the marriage otherwise over. In the Vanisher’s Palace is a retelling of Beauty and the Beast and it’s not news that consent is also a complicated issue in this story. But instead of avoiding the issue by adding something or changing parts of the story, consent becomes a major part of it.

Yên is relieved when it turns out that Vu Côn doesn’t mean to harm her. She’s even attracted to her. But she still sees her as the person who tore her from her home and is now keeping her a prisoner. With time she realises that Vu Côn didn’t have much choice: Yên couldn’t have stayed in her village and has no chance of surviving on her own in the post-apocalyptic world the story is set in. It takes her some time to see that not everybody is against her (an understandable fear, since apart from her mother, she hasn’t met many people who were truly on her side).

But Vu Côn keeps making decisions for her. She keeps information concerning Yên and her family from her and also doesn’t tell the whole truth about what is going on in the palace. And Yên can’t simply switch off her mistrust, so both have a lot to learn (and unlearn).

In the Vanisher’s Palace is a romance but one set in a post-apocalyptic world. So, while Yên and Vu Côn do get their happy end, there is no magical solution that turns the world in a better place again. Things still look rather dark at the end, and I prefer my romances a bit more light-hearted. I want to make clear that this isn’t the ‘fault’ of the book. An ending with a magical cure-all solution wouldn’t have fitted the story – and the fascinating world de Bodard created – at all. And after all, the fact that it was a post-apocalyptic story was made clear in advance, so I knew I wouldn’t get a typical ‘And they lived happily ever after’-ending. I gave the book a try anyway because the premise sounded fascinating. And I did love how this version of Beauty and the Beast was interpreted and how the relationship developed. Yên and Vo Côn, as well as the other characters, were great. But in the end, I couldn’t completely forget that it’s still a genre that’s not my cup of tea at all. If it is yours I can wholeheartedly recommend this story.