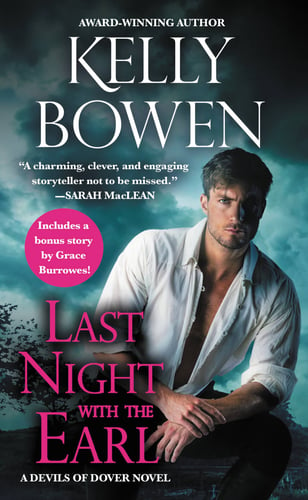 Earl. War hero. Notorious rake. After the Battle of Waterloo, Eli Dawes was presumed dead-and would have happily stayed that way. He's no longer the reckless young man he once was, and only half as pretty. All he wants is to hide away in his country home, where no one can see his scars. But when he tries to sneak into his old bedroom in the middle of the night, he's shocked to find someone already there.

Rose Hayward remembers Eli as the arrogant lord who helped her late fiancé betray her. Finding him stealing into her art studio doesn't correct her impression. Her only thought is to get him to leave immediately. Yet the tension between them is electric, and she can't help but be drawn to him. He might be back from the dead, but it's Rose who is suddenly feeling very, very much alive.

Review: Last Night With the Earl, by Kelly Bowen

As I mentioned in September's Top Off Your TBR post, I was excited for this couple when I was reading the previous book in the series. The heroine is a painter, teaching other young women how to paint and pursuing her own career (painting scandalous portraits for the nouveau riche). The hero is an earl, long thought dead following the Battle of Waterloo. He comes back one night and walks into his bedroom at his Dover estate, only to discover the woman he's always loved already in residence.

I read this book on audio, which means that when I read it in less than two days, I spent a good portion of those days with noise-cancelling headphones over my ears, ignoring the world. It was that good.

Eli returns from war with half of his face badly burned. He's lost an eye and most of one ear, as well as 6 years spent hiding from the world he grew up in. Once the golden boy of the ton, he's now not as conventionally attractive and is weary of the frivolous pursuits of his past. (He comes back for a reason that I can't give away, but it's explained in a way that made sense to me.)

As you can tell from the blurb, there's a betrayal to be reckoned with, but it's entirely at the feet of Rose's former fiance, not Eli. The fiance was an all around coward, a selfish, privileged prat whom you'll love to hate. He gets what he deserves, a fate that's revealed as the book progresses.

Why does Rose think Eli is responsible, though? Because he was one of the fiance's closest friends. What redeemed Eli in this case was that he not only realized that he was partly to blame for the betrayal even though he didn't take any action, but because that he could have acted to prevent it. What's missing in a lot of discourse these days when we talk about men being awful to women (and other men) is that the so-called "good men" don't take responsibility for staying silent when the "bad men" are talking or acting in ways they shouldn't. Women are, of course, not exempt from this, and Rose is exiled from society in large part because of the ways in which women respond to the fiance's betrayal. (I'm being vague here, but I can tell you it's not an assault.)

There's also a nod to the ways in which law enforcement makes life harder on disadvantaged people trying to scrape by.

Rose is a smart, kind, feminist. She's built a life for herself outside of Society after years of horrible treatment and painstaking work to reclaim her sense of self. Falling in love with Eli, building her life with him instead of with the School, means that she'd have to confront those same horrible people. She has at least one panic attack when she tries.

Eli, for his part, also wants nothing to do with society, but he's been in love with Rose since the day he was introduced to her as his friend's betrothed. He spent as much time as possible with her until he realized he was being a bad friend, and then he threw himself into drinking and womanizing. As one does.

The rake and the bluestocking has been done a thousand times before, but Bowen puts her own spin on it in Last Night with the Earl. The two protagonists bonded in the past and find each other again through art and charity, working with young women and war widows. It's the sort of foundation that makes me believe in their Happily Ever After long after the sizzling sexual fades away.

Bowen again proves herself capable of balancing a complicated plot with deep, swirling emotions and a hero who is both strong and caring and... dare we say... rather a feminist.