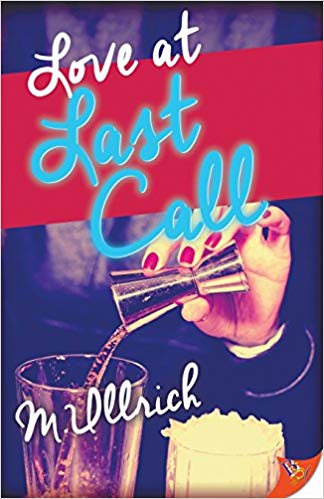 Lauren Daly is fed up with her dead-end job, frustrating roommates, and unhealthy love life. She escapes to The Dollhouse, New Jersey’s hottest lesbian bar, where disappearing in a crowd of gorgeous women is exactly what she needs at the end of the day. But when the owner, Berit Matthews, approaches her for a casual hookup, Lauren pushes her away, knowing better than to put her heart on the line for a playgirl.

Berit loves her bar, her life, and the casual connections she has with the women around her. She can’t help her simmering attraction for Lauren, though, and Lauren’s rejection challenges her to prove she's capable of friendship, kindness, and even matchmaking. Berit’s efforts draw them closer than either expected, but when The Dollhouse is threatened, they’re forced to fight for their sanctuary and their newfound love.

This book was like a well-crafted cocktail - not too sweet, not too bitter, and left me with a warm feeling in my body. You've probably noticed by now that Margrethe and I tend not to have the best of luck with the subgenre of books called "lesfic," either because of bi-erasure, quality of writing/editing, egregious sexual assault, or racism. This book isn't any of that!

Lauren is a paralegal going through a really rough patch. She and her roommate don't make enough money to pay their rent, so Lauren's controlling ex-girlfriend still lives with them. Her roommate Jorge's girlfriend also lives with them but is just free-loading because that's what some young 20-somethings do. (Been there, lost a best-friend over it.) Her boss is terrible and she's fired pretty early on in the book.

Berit is the owner of The Dollhouse, a lesbian bar in New Jersey. She's got a reputation as a playgirl, but it's not really deserved. She's a bartender and it's sort of her trade to be really flirty, but the only other woman we see her with in the book is a secondary character named Bellamy, in a mutually agreed upon sex-only relationship. She has her own stuff to sort out, mostly with her family, but she's presented initially as the person who has it together.

One thing that often bothers me in books is when one of the love interests works for the other. I'm not sure how M. Ullrich managed it, but I didn't feel icky about the power dynamic in this at all. Maybe it's because they became friends before Berit hired her? Maybe because Lauren is with another woman when she starts bartending? Or it could just be that Berit's bar is quite professional, for all the shenanigans that go on.  (The Dollhouse is a bar I'd love to go to.)

The pacing in the book is steady, even after the couple gets together. The writing is a little clunky at first, but I reviewed an advance copy, so I can't confirm if my desire for more paragraph breaks was addressed in the final version. Once you get into the book, though, it's smooth sailing. There were moments that made me cringe, but they were things like Lauren's boss being realistically awful, Berit's strained relationship with her father, and the eventual Dark Moment.

Speaking of Berit's father, I appreciated that their relationship is strained not because of homophobia but because he's never taken responsibility for the financial mistakes he made when Berit was younger. (He lost her college fund and screwed over the city's mayor, which has made Berit's job years later much, much harder.) Berit's sister, Lou owns 1/3 of the bar, so she works there and is a central character in the novel. She's sort of the glue that holds Berit together, and I liked their relationship a lot as well.

There were a lot of bartending details that spoke to me as long-time restaurant employee/manager. Berit has a dog named Hugo who is kind of adorable and is based on Ullrich's own late companion. The secondary characters all read like real people, not caricatures.

As for the central pairing? They don't get together until around 60% of the way through the book. That means that the first half of the book is them becoming friends, avoiding their feelings, and trying to date other people. Berit comes on to Lauren really strongly when they first meet and Lauren shuts her down, so then Berit is respectful! Lauren has some self-esteem stuff to work through and by the time they do get together, it feels like the culmination of weeks of tiny steps. Berit pushes Lauren in small ways, asking her to please get out of that apartment, but Lauren pushes back and asserts her independence. It's a very balanced relationship in which they make each other want to be better.

The sex is mostly in the last third of the book, but was well written. There's a scene with *spoiler* where *spoiler* and you'll just have to read it yourself.

Anyway, I finally have a Bold Strokes Books book that I feel comfortable recommending! I'm hoping that Bellamy and Jennifer (the women Lauren and Berit date) get their own books soon.