More mini-reviews! Reviews of Ariadne, Blade of Secrets, The Secret Lives of Church Ladies, The Wolf and the Woodsman, Black Water Sister and Some Girls Do. This is a really mixed selection: a Greek myth retelling, a YA fantasy, a short story collection, two adult fantasy novels and a YA contemporary romance.

Ariadne, by Jennifer Saint
My Verdict: Read It Eventually

For readers familiar with the story of Ariadne, this book will read as less of a retelling and more of a telling. What sets it apart is the fiercely feminist angle and the pieces Jennifer Saint chooses to focus on. For example, while the book begins with Ariadne and her siblings' childhoods on Crete and their father's brutal nature, the story of Theseus and the Minotaur is just the lead-in to Ariadne's actual life story. Abandoned alone on a remote island by Theseus, Ariadne goes through periods of acute despair, hunger and suicidal ideation. When Dionysus arrives, a god seemingly unlike the other gods, she blossoms like the grapes that suddenly grow in masses on the island. And yet... all is not well in her marriage. Dionysus is not the prince he appears to be and Ariadne once again has to deal with the fallout from the choices of men.

The ongoing theme in Ariadne is that women are forced to clean up the messes that men and the male gods make. Her mother is bewitched to want to have sex with a bull because Minos is a horrible person. Her younger sister has to marry a bad man for the safety of her people. Ariadne is abandoned on an island after helping Theseus kill her brother. Then she's abandoned again by the man she loves and has to fight him to keep her children safe. Saint works in stories of other women like Medusa, making sure to point out the ways in which other women and goddesses are active participants in the subjugation and abuse of women.

Though this book starts slow and indeed some parts continue to drag a bit, the overall story is a much-needed reworking of this classic myth and gives women back their often-silenced voices.
The audio narration is excellent. I felt the narrator was well-suited to the material and to the low and steady anger that characterizes Ariadne. She isn't a firebrand, her strength is more maternal and vulnerable, but maternal does not mean passive and both the book and narrator convey that.

Content Warnings: this is a retelling of Greek myth, so there are frequent references to forced marriage, rape, war violence, betrayal and the like 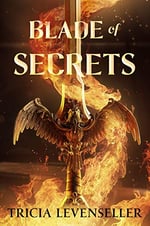 Blade of Secrets, by Tricia Levenseller
My Verdict: Read It Soon

Levenseller writes books that may have some plot holes but are so thoroughly enjoyable that they hardly matter. The plot here is fast-paced and the magic system is unique and (again, some plot holes) fun.
Romance, swords, unexpected danger, secret identities and just the right amount of fighting result in a fantasy novel that's nearly impossible to put down. Though the book follows two close-knit sisters, the blacksmith sister is not conventionally attractive (very tall, not feminine) and it's a delight to watch a mercenary fall hard for her.
Readers who like her earlier work will love Blade of Secrets, but a cliffhanger will leave everyone begging for the sequel.

The Secret Lives of Church Ladies, by Deeshaw Philyaw
My Verdict: Read It Soon

Aarya (@ardentlyaarya) recommended this to me and I loved it. These stories are subversive and frequently queer and really well-written. I zipped through this collection in one day on audio and found myself bereft when I was done. As it says in the blurb, the stories are interconnected and follow four generations of women with varying relationships to each other and church. It's not a religious collection, though, more an exploration of community and how we relate to the generations before and after us and where we overlap and diverge in beliefs. There's also a good bit of sex. At times poignant, sexy and funny, this is an excellent read.

Content Warnings: homophobia, crappy relationship, others I'm sure but I don't remember (sorry!) 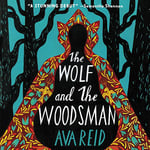 The Wolf and the Woodsman, by Ava Reid
My Verdict: Read It Eventually

So many "wolf" books this year and none of them involving actual wolves. I think my reading of this book may have suffered from the fact that I read it so soon after For the Wolf, but I found that the plot dragged at several points and it read sort of like Serpent & Dove but less problematic and more political. The Woodsmen are like a specialized religious military group and the Wolfgirls are persecuted pagans. Évike learns that her father is Yehuli (Jewish) and that side of her lineage is also persecuted. She is taken by the Woodsmen and their leader, contested heir to the throne Gáspár, is of course a "good" Woodsman. On the journey from her village to the city,  she tells stories, pagan myths drawn from Jewish and Hungarian tales and one of my favorite parts of the book. They also overcome their prejudices and fall in love. The sex is well-written and I liked the internal conflict Gáspár had to wrestle with as his attraction to the sexually-liberated Évike grew.  I'm conflicted on a lot of the "overcome their prejudices when one group holds all the power" plot, but it's such a common one (Serpent & Dove, The Unbroken, etc etc) that I'm going to leave it to others to analyze. Both Gáspár and Évike have to do a lot of things they don't like in order to survive or mitigate damage, but I wanted to burn it all down and I assume others will as well.

Audio Notes: Saskia Maarleveld narrates and she is, as usual, excellent. Her acting and the low, somewhat gravelly tone of her voice adeptly convey the intensity, emotional turmoil and violence in The Wolf and the Woodsman.

Content Warnings:  mutilation, murder, attempted murder, religious and ethnic cleansing and persecution, torture, possible attempted rape? (I think he was trying to kill her, but men are gross), 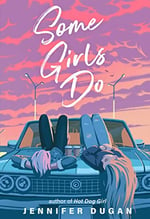 Some Girls Do, by Jen Dugan
My Verdict: Read It Eventually/YMMV

Jen Dugan writes books that make readers uncomfortable. The teens tend to be messy, which makes them both real and hard to stomach at times. In this case, we have a closeted bisexual character, Ruby, who has a "bad reputation" because she has a FWB deal with a popular male lacrosse player.  She lives in a trailer with her mother and the current disgusting man her mother is dating (CW for sexual harassment and implied desire to do worse). Morgan is out but it got her kicked out of her conservative Catholic school and now she's finishing her senior year at Ruby's school while her parents pursue legal action. As an elite track athlete, she was offered scholarships at a couple of colleges, but one rescinded their offer when she was expelled. It's a whole mess and she's become something of a notorious figure.

The two girls are immediately (and reluctantly) attracted to each other, but they have such different lifestyles and goals that their relationship is complicated. Ruby's mother was a pageant queen before becoming pregnant as a teen and has spent far too much time and money pushing Ruby to achieve her dream since she couldn't. Ruby would much rather be a mechanic. Morgan just wants to sue the hell out of her homophobic former school and be the out and proud athlete she is.

The reason I say this book is uncomfortable is because it doesn't follow the expected narrative. After they're together, Morgan pressures Ruby to come out and Ruby pressures Morgan to keep their relationship secret. Both of them have legitimate reasons, but they hurt each other to the point where you wonder if they should be together at all. I don't usually sympathize with the "keep it secret" character, but in this case, Morgan was not understanding at all of Ruby's family situation and pretty self-centered about queerness. She does eventually realize what she's doing and apologizes, just as Ruby eventually stands up for herself, but it's pretty not-great at times.

In the end, I want good things for both MCs, but I'm not sure they'll be in it for the long-term.

Content Warnings: sexual harassment of a minor, MC is kicked out of her home for being queer (she has a loving ex step-father and goes to live with him), forced "beauty" regimen, slutshaming, closeted MC, biphobia, homophobia, poverty, bad parent, expulsion, alcohol use and abuse 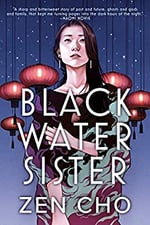 Zen Cho has given us another sapphic fantasy novel, but this one is contemporary and set in Malaysia. As usual, her writing is beautiful and her characters are nuanced, but this felt much more personal than her historical England books. The main character was raised in the US to immigrant parents and as the book begins they've all moved in with relatives in Malaysia. (Normally I wouldn't draw connections between an author and her characters like this, but Cho's author bio says she "lives in a notional space between the two" when referring to the UK and Malaysia.) Jessamyn feels like an outsider in both her former home and her new home, not enough/too much for either. She's also in a long-distance lesbian relationship, which she has to hide from her conservative family.

Then there are the ghosts. Cho builds her plots slowly, so I was initially more interested in the family dynamics as everyone adjusted to their new situation, but then the ghost stuff picks up and once it does... I'm not sure how much to say without spoiling the plot, but here are the highlights: murderous ghosts, possession, an even more murderous god, rival gangs, gore and murder, who is on what side?!, hipster chic cafe at a temple?, reflections on wealth and power with respect to race and gender and family ties.

Recommended if you want a fantasy novel that could/should also be a riveting film.

I borrowed this audiobook from my library and purchased a paper copy.

I also read For the Wolf for Shelf Awareness and really enjoyed it. (CW for violence, kidnapping/torture and murder trees)