Top Off Your TBR: November 2021 Edition

Happy mid-November! Here is a very late edition of my Top Off Your TBR list. 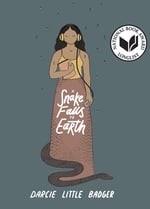 A Snake Falls to Earth, by Darcie Little Badger - November 9

Nina is a Lipan girl in our world. She's always felt there was something more out there. She still believes in the old stories.

Oli is a cottonmouth kid, from the land of spirits and monsters. Like all cottonmouths, he's been cast from home. He's found a new one on the banks of the bottomless lake.

Nina and Oli have no idea the other exists. But a catastrophic event on Earth, and a strange sickness that befalls Oli's best friend, will drive their worlds together in ways they haven't been in centuries.

And there are some who will kill to keep them apart.

A Snake Falls to Earth is a breathtaking work of Indigenous futurism. Darcie Little Badger draws on traditional Lipan Apache storytelling structure to weave another unforgettable tale of monsters, magic, and family. It is not to be missed.

Why I Want to Read It - Elatsoe stuck with me for a long time after reading, so I've been looking forward to this followup! I find snakes unsettling, but I trust this author to change my mind. 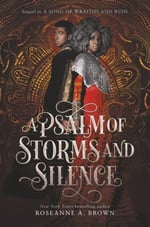 A Psalm of Storms and Silence, by Roseanne A. Brown - November 2

The highly anticipated second—and final—book in the immersive fantasy duology inspired by West African folklore that began with the New York Times bestselling A Song of Wraiths and Ruin, from author Roseanne A. Brown. Perfect for fans of Tomi Adeyemi, Renée Ahdieh, and Sabaa Tahir.

Karina lost everything after a violent coup left her without her kingdom or her throne. Now the most wanted person in Sonande, her only hope of reclaiming what is rightfully hers lies in a divine power hidden in the long-lost city of her ancestors.

Meanwhile, the resurrection of Karina’s sister has spiraled the world into chaos, with disaster after disaster threatening the hard-won peace Malik has found as Farid’s apprentice. When they discover that Karina herself is the key to restoring balance, Malik must use his magic to lure her back to their side. But how do you regain the trust of someone you once tried to kill?

As the fabric holding Sonande together begins to tear, Malik and Karina once again find themselves torn between their duties and their desires. And when the fate of everything hangs on a single, horrifying choice, they each must decide what they value most—a power that could transform the world, or a love that could transform their lives.

Why I Want to Read It -  I loved the first in this series and have been dying for this one. I saw their hands are touching on the cover and even though Brown says she's going to drag her characters through it... I bet I'll be happy to have my heart torn out. 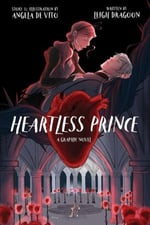 A fierce warrior must save the heart of her beloved prince before it's too late in the first book of a new YA fantasy-adventure graphic novel trilogy, perfect for fans of Noelle Stevenson's Nimona and Kazu Kibuishi's Amulet

Evony is an orphaned princess from a kingdom destroyed by a power-hungry witch. Prince Ammon has recently been drawn to her, or at least he’s drawn to her uncanny ability to sense when familiars―servants to the witches―are approaching his kingdom’s borders. And Evony, well Evony has always longed for something more with Ammon. Wanting to prove himself to his kingdom and parents, Ammon takes Evony outside the borders to fight the familiars head-to-head. All is well until they’re captured by witch Aradia, who steals Ammon’s heart and leaves his body to turn into one of her familiars. What’s worse, his sister Nissa has been taken hostage by Aradia’s daughter. Evony makes it her mission to retrieve Ammon’s heart and save Nissa, taking her into the mysterious Witchlands. There, she will discover a secret about her past that will change everything.

Why I Want to Read It -  I'm not sure why I haven't been hearing about this graphic novel everywhere given that I run a romance comics site, but it sounds like everything I want in a book?

Apparently November is RELEASE THE BOOKS! month, so the list below is far longer than usual.

All of these books have been collected into one easy Amazon list.

More November Releases To Top Off Your TBR:

November 2 - I Hate You More, by Lucy Gilmore

November 2 - A Kiss for Luck, by Jennifer Ashley

November 2 - The Fastest Way to Fall, by Denise Williams

November 2 - Blame It on the Mistletoe, by Beth Garrod

November 2 - Into the Bloodred Woods, by Martha Brokenbrough

November 2 - You Can Go Your Own Way, by Eric Smith

November 9 - Never Fall for Your Fiancée, by Virginia Heath

November 9 - Just Haven't Met You Yet, by Sophie Cousens

November 9 - All of Us Villains, by Amanda Foody and Christine Lynn Herman

November 9 - Year of the Reaper, by Makiia Lucier

November 9 - Sway with Me, by Syed M. Masood

November 9 - The Geek Who Saved Christmas, by Annabeth Albert

November 9 - A Snake Falls to Earth, by Darcie Little Badger

November 9 - The Wit and Wisdom of Bridgerton, by Julia Quinn

November 9 - Comfort Me With Apples, by Catherynne M. Valente

November 11 - One Night with a Nutcracker, by Jana Aston

November 15 - Wed to the Wild God, by Ruby Dixon

November 16 - A Rush of Wings, by Laura E. Weymouth

November 16 - Under a Starlit Sky, by E.M. Castellan

November 16 - The Sinful Ways of Jamie Mackenzie, by Jennifer Ashley

November 16 - The Nobleman's Guide to Scandal and Shipwrecks, by Mackenzi Lee

November 16 - All the Feels, by Olivia Dade (date change)

November 16 - A Convenient Arrangement, by Aurora Rey and Jaime Clevenger

November 16 - An Heiress's Guide to Deception and Desire, by Manda Collins

November 18 - The Bachelor on the Shelf, by Jana Aston

November 23 - The Becoming, by Nora Roberts

November 30 - How to Survive a Modern-Day Fairytale, by Elle Cruz

November 30 - A Swift and Savage Tide, by Chloe Neill

November 30 - After Dark with the Duke, by Julie Anne Long

November 30 - Girls of Fate and Fury, by Natasha Ngan

November 30 - King of Battle and Blood, by Scarlett St. Clair

November 30 - And They Lived Happily Ever After, by Therese Beharrie