Top Off Your TBR: October 2021 Edition

October is the best month because

1) it's my birthday month

2) all the spooky and spoopy books come out

Turns out, publishing is (mostly) on my side here. If only we could keep all the Christmas books out of my Halloween time...

All the Feels, by Olivia Dade - October 26

Following Spoiler Alert, Olivia Dade returns with another utterly charming romantic comedy about a devil-may-care actor—who actually cares more than anyone knows—and the no-nonsense woman hired to keep him in line.

Alexander Woodroe has it all. Charm. Sex appeal. Wealth. Fame. A starring role as Cupid on TV’s biggest show, Gods of the Gates. But the showrunners have wrecked his character, he's dogged by old demons, and his post-show future remains uncertain. When all that reckless emotion explodes into a bar fight, the tabloids and public agree: his star is falling.

Enter Lauren Clegg, the former ER therapist hired to keep him in line. Compared to her previous work, watching over handsome but impulsive Alex shouldn’t be especially difficult. But the more time they spend together, the harder it gets to keep her professional remove and her heart intact, especially when she discovers the reasons behind his recklessness…not to mention his Cupid fanfiction habit.

When another scandal lands Alex in major hot water and costs Lauren her job, she’ll have to choose between protecting him and offering him what he really wants—her. But he’s determined to keep his improbably short, impossibly stubborn, and extremely endearing minder in his life any way he can. And on a road trip up the California coast together, he intends to show her exactly what a falling star will do to catch the woman he loves: anything at all.

Why I Want to Read It -  I'm finishing this up right now and it's going to appeal to people the same way Spoiler Alert did. I'm biased because of my love of Olivia Dade as a human, but that just means the book has some of the same things I love about its author. #HagCorner

Kingdom of the Cursed, by Kerri Maniscalco - October 5

One sister.
Two sinful princes.
Infinite deception with a side of revenge . . . Welcome to Hell.

After selling her soul to become Queen of the Wicked, Emilia travels to the Seven Circles with the enigmatic Prince of Wrath, where she's introduced to a seductive world of vice.

She vows to do whatever it takes to avenge her beloved sister, Vittoria . . . even if that means accepting the hand of the Prince of Pride, the king of demons.

The first rule in the court of the Wicked? Trust no one. With back-stabbing princes, luxurious palaces, mysterious party invitations, and conflicting clues about who really killed her twin, Emilia finds herself more alone than ever before. Can she even trust Wrath, her one-time ally in the mortal world .  . or is he keeping dangerous secrets about his true nature?

Emilia will be tested in every way as she seeks a series of magical objects that will unlock the clues of her past and the answers she craves . . .

Why I Want to Read It -  I might read the first book in this series again because I loved it and I've been waiting for this sequel ever since that ending. 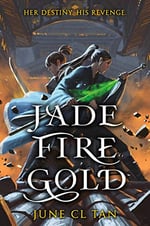 Ahn is no one, with no past and no family.

Altan is a lost heir, his future stolen away as a child.

When they meet, Altan sees in Ahn a path to reclaiming the throne. Ahn sees a way to finally unlock her past and understand her lethal magical abilities.

But they may have to pay a far deadlier price than either could have imagined.

A stunning homage to the Xianxia novel with dangerous magic, fast-paced action, and a delightful  romance, Jade Fire Gold isn’t one to miss!

Why I Want to Read It -  I was lured in by the cover, but really this jacket copy is everything. I think it'll be a "Big Book" this fall too, if the number of YA book subscription boxes featuring it is any indication.

October 4 - The House on Druid Lake, by Isabelle Adler

October 5 - Not Your Average Hot Guy, by Gwenda Bond

October 5 - A Twist of Fate, by Kelley Armstrong

October 12 - The Brightest Star in Paris, by Diana Biller

October 12 - The Heartbreak Bakery, by A. R. Capetta

October 12 - Our Way Back to Always, by Nina Moreno

October 18 - Of Trust and Heart, by Charlotte Anne Hamilton

October 19 - Within These Wicked Walls, by Lauren Blackwood

October 19 - Her Wolf in the Wild, by Rien Gray

October 19 - A Shadow in the Ember, by Jennifer L. Armentrout

October 26 - Just for the Holidays, by Adriana Herrera

October 26 - Comfort Me With Apples, by Catherynne M. Valente

October 26 - Meet Me in Madrid, by Verity Lowell

October 26 - A Thorn in the Saddle, by Rebekah Weatherspoon

October 26 - The Lady Gets Lucky, by Joanna Shupe

October 26 - The Perks of Loving a Wallflower, by Erica Ridley