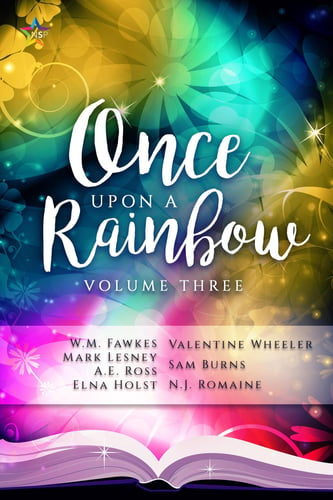 Your favorite stories from childhood have a new twist. Seven fairy tales of old with characters across the LGBTQIA+ spectrum.

Green Things Grow from Cinders by A.E. Ross – Glass slippers aren't for everyone.

Gretel on Her Own by Elna Holst – This time around, Gretel Kindermann is on her own. Or is she?

Bremen Town Musicians by Mark Lesney – Loss and love on the road to Bremen Town.

The Scent of Magic by N.J. Romaine – Who can win a hunt against the Big Bad Wolf?

The Rescue by Sam Burns – Saving princesses is hard work. Getting out of marrying them is harder.

Loose in the Heel, Tight in the Toe by Valentine Wheeler – The shoe fits, the prince is won: now what?

Baile de la Marioneta by W.M. Fawkes – No one else can pull his strings.

Review: Once Upon a Rainbow, Volume 3

The latest edition of Ninestar Press's Once Upon a Rainbow series is thoroughly charming. The premise is simple: queer retellings of classic fairy tales, but the execution is, for lack of a better word,  magical. I haven't read the first two volumes, but bought them immediately upon finishing this review copy. As with their Into the Mystic anthologies, Ninestar's editorial chops are on full display here - none of the stories stand out as "filler." Yes, there are a few that worked better for me than others, but most of that is personal preference, not objective quality issues.

There's something immeasurably satisfying about reading the stories I grew up with, turned into queer happily-ever-afters. Why shouldn't Cinderella be trans? Is that not the perfect story for a trans man? Why shouldn't Pinocchio be a lovingly-crafted sculpture come to life as a lover? And why must the Big Bad Wolf always be a man? Retelling fairy tales from a queer perspective brings something fresh to each of these stories, so much so that I didn't realize there were two Cinderella retellings until I was writing this review.

If you want a bit more on each of the stories, I've written the tiniest of reviews for each of the seven below. TL;DR:  If you're looking for a palate cleanser, some delightfully queer fluff, or a story that makes you cry because you feel seen? This is an excellent volume.

Jose is an art student studying sculpture, and one day he crafts a man out of wood. This is a surprising Pinocchio retelling - when the wooden man lies, it's not his nose that grows. This little detail could have tipped the story from sweet to crass, but it doesn't. I think this was the most emotionally charged of the anthology, with an exploration of consent, ownership, and the power of love to transform.

Loose in the Heel, Tight in the Toe, by Valentine Wheeler

This is the first of two Cinderella retellings, this time with a lesbian Cinderella who wants to go to the ball but really doesn't want to marry the prince. Turns out... he's asexual and more than happy to make an arrangement with his bride-to-be. The author also works in a cast of secondary characters and story elements that make the whole thing come together very well. One of the best in the anthology.

I adored this story. The hero is a trans man who owns a florist shop and isn't out to his roommates. He has a huge crush on the man hosting a friend's wedding (that he's doing the flowers for) but doesn't want to go in the bridesmaid dress he ordered months ago. Cue the fairy godmother, who steps in to send this Cinderfella off to the ball in style.

The Scent of Magic, by N.J. Romaine

The wolf in this story is a soldier/hunter who's exiled herself to the woods after the kingdom she protected is cursed to go to sleep. A girl with a red cloak is walking through the forest and the wolf offers to escort her. But nothing is quite what it seems...

The Rescue, by Sam Burns

This one has a few twists, so I'll just say that it's the story of a gay knight who really doesn't want to marry the princess he's set off to rescue from the dragon. There's definitely an HEA, though!

The classic folktale, but twisted to be about a ragtag group of teens who've been called by names like "Donkey" and "Hound" all their lives. I had issues with the use of the word g*psy and also with the fact that a band of said Romani were brutally killed by the robbers in the story. Not great to have a persecuted minority group in your book to provide an emotional arc for the main characters, and to refer to them by an ethnic slur... The folk tale itself has always been messed up, right? I knew this was going to be a dark story, with scaring off robbers and so on, but I think the slaughter of 10 innocent Roma could have been left out.

The queer pairing is m/m, in case you're curious.

Gretel on Her Own, by Elna Holst

As you can probably predict from the title, this is a Hansel and Gretel retelling that focuses on Gretel. The story is an f/f romance that explores themes mental illness, magic, and temptation. It was confusing in a wonderful sort of way.