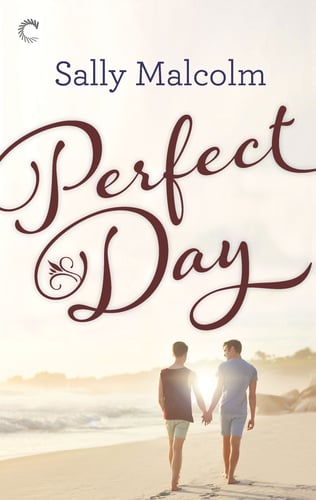 Love doesn’t burn out just because the timing’s wrong. It grows. It never leaves.

When Joshua Newton, prodigal son of one of New Milton’s elite, fell in love with ambitious young actor Finn Callaghan, his world finally made sense. With every stolen moment, soft touch and breathless kiss, they fell deeper in love.

Finn was his future…until he wasn’t.

Eight years later, Finn has returned to the seaside town where it all began. He’s on the brink of stardom, a far cry from the poor mechanic who spent one gorgeous summer falling in love on the beach.

The last thing he wants is a second chance with the man who broke his heart. Finn has spent a long time forgetting Joshua Newton—he certainly doesn’t plan to forgive him.

Perfect Day is a queer retelling of Jane Austen's Persuasion and I have many strong (and good) feelings about it. Eight years ago, Joshua chose to stay with his family instead of following his boyfriend, Finn, to California. Joshua lives in his hometown working as a barista and piano teacher after his father disowned him for being gay. With his father in prison for tax evasion, the old family mansion is being sold to Finn’s brother. Forced to see each other, both men confront how they feel and the repercussions of how they broke up. Finn is a tiny bit of a jerk during this time as he dates the music teacher at the school.

The book holds rather close to the plot beats of Persuasion, and I’m surprised to say that it did it really well. I think the reason it works so well is that Malcolm infuses the story with so much heart. The book doesn’t exist to replicate Persuasion, but uses its bones to create a lovely and touching story about second chances at love. What could have been a gimmick is heartfelt and shows that not only does Malcolm know the source material, but that she wanted to do right by it.

Here’s the personal part of this review. Somewhere in the middle of Perfect Day, I felt like I was being revealed, that I was actually that person who was learning more about herself by reading this book, which is not something that usually happens. Further, I felt as if I understood why I love Persuasion so much and feel such an affinity with Anne Elliot. I’m not sure how, but Perfect Day clarified that for me and it was such an oddly emotional thing. Friends were a little concerned when I said I felt exposed, but it wasn't a bad thing, it was just a lot. (And granted, I had just changed jobs and was very very tired, but I think the feeling is still true.) All of this to say that Joshua, as with Anne, is a character people only notice for what he offers them; the only characters who aren't using Joshua, or taking advantage of his kindness, are Finn's brother, his sister-in-law, and Finn.

I think the moment that struck me most was when Josh discovers that no one knew he was gay. He was so certain it was obvious, and all of his energy is going into not revealing that Finn was his first love, so the realization that no one in town knew or possibly cared is overwhelming. This was the first book I've read in a while that really captured the essence of how it feels to believe you're being obvious about how you don't fit the default, only to realize that no one was noticing. And now I sound really moody, and maybe I am moody about this book.

However, I have two criticisms. First, I think the ending is too long; it sort of languishes in the happily ever after with more sentimentality than an already emotional me wanted. Second, "fag" is used by Joshua in a playful way and then later when he imagines how his brother describes him. And I'm never on solid ground with that word: is it a slur? Is it no longer a slur? Has it been reclaimed?

So, there you go. I really enjoyed Perfect Day. I'm even going to buy the book once I finish writing this review. I cannot promise that it will be as emotional a read for others as it was for me, but if you are looking for a queer Persuasion retelling, I don't think you can go wrong with this book. And I eagerly await what Malcolm has for us next.