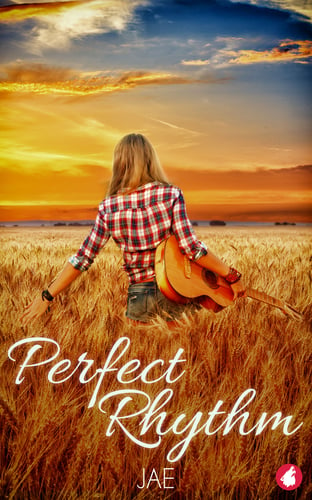 Pop star Leontyne Blake might sing about love, but she stopped believing in it a long time ago. What women want is her image, not the real her. When her father has a stroke, she flees the spotlight and returns to her tiny Missouri hometown. In her childhood home, she meets small-town nurse Holly Drummond, who isn’t impressed by Leo’s fame at all. That isn’t the only thing that makes Holly different from other women. She’s also asexual. For her, dating is a minefield of expectations that she has decided to avoid. Can the tentative friendship between a burned-out pop star and a woman not interested in sex develop into something more despite their diverse expectations? A lesbian romance about seeking the perfect rhythm between two very different people—and finding happiness where they least expect it.

Whenever I stumble upon a romance with an asexual or a-spec character, I’m always a mix of “I need to read this to judge!” and “It’s probably a mess.” And because, more often than not, they are messy with the a-spec representation, these books are a challenge. Add to that seeing your sexuality as the primary conflict in a romance, which always stings a bit. I had been circling Perfect Rhythm for a few months, but jumped in when I saw the audiobook on Hoopla.

And Perfect Rhythm got asexuality mostly right, and it’s also a pretty good book. It’s not perfect, but it’s not the disaster I feared.

The book is about Leontyne (Leo), a popstar, returning home after her father has a stroke. Growing up, Leo felt limited and judged by her small town and parents for being gay, so going home is stressful beyond her father’s illness. When she arrives, she meets her father’s home care nurse, Holly. The two spar initially over Leo’s return because this was not her father’s first stroke, which Holly knows and Leo does not. Eventually, they become friends and slowly help each other deal with their wounds: Leo and her parents’ rejection of her because she’s a lesbian, and Holly and her past relationships that told her being asexual would lead to never finding love.

Something to know up front is that there is a lot of focus on Leo’s father’s illness and care, and I have no idea if these are treated correctly. I will also point out, and it’s sort of a spoiler, that her father does die. It seemed to be handled with care, but this is way outside my experience.

The romance is gentle and the book generally treats the characters with great care. There are no shocking reveals or threats to safety. It is about two women finding each other during a bad situation and falling in love. You feel Leo’s uncertainty being home, worrying about running into people she knew from high school, including her high school crush. She spends a great deal of time trying to reconcile who she is now with the small town she never fit.

And when it comes to asexuality, the book is generally careful. It’s clear that Jae did a lot of research when writing the book, but sometimes, it reads like a way to explain asexuality to allosexuals and a laundry list of things you can read on AVEN or Tumblr. When the book focuses on Holly wearing a black ring and its meaning, it felt like it wanted Brownie points for knowing that. There’s also a clumsy exchange when Holly explains asexuality by discussing chocolate preferences. (Please know that asexuality is not about likes and dislikes, it’s about not experiencing sexual attraction.) There are a number of these learning moments that pulled me out of the book, because the discussions seemed forced. One day, I would like a character to be a-spec without a notable portion of the book going into explaining everything.

One thing the book does poorly in regards to asexuality is stumble over Leo’s reaction to Holly’s asexuality. She asks if Holly was abused to make her asexual. She reflects on whether or not she could be with an asexual woman. I will give her points for researching a lot. My issue is that these are concerns a-spec folks face in reality and it would be nice sometimes if we didn’t face it in romance novels. Did it hurt me? No, but YMMV. The book does repeatedly point out that there is no one asexual experience, but Holly’s is pretty much textbook AVEN FAQ.

My biggest complaint is one I have about most romances with a-spec characters: the primary conflict revolves around how to manage sex when one person is asexual. Both Leo and Holly worry about this, and with Leo, it’s handled sloppily. Because Holly has been rejected over her asexuality before, her concern that she won’t be enough for Leo is real enough. But when they have decided to be together and they sort of negotiate how to be intimate, Leo freaks out. During some heavy petting and cuddling, Leo is so turned on that she needs a release, but instead of actually talking to Holly, she runs away and masturbates in the bathroom. They discuss it, but as a reader, it’s jarring. As an a-spec reader, a scene like that makes me aware that my existence is a conflict.

I’m not saying that sex isn’t a concern or a potential conflict (this is why we see more demisexual characters than asexual characters in romance), but the potential lack of sex before a real conversation is what threatens to break them up. And for a genre built around the romance and relationship, placing sex as the conflict feels damaging. The moment someone comments somewhere that they need to have a sex scene to believe in the romance, I am instantly perplexed. What about everything else? Exposing your vulnerabilities to another, telling someone about your hopes and dreams, trusting this other person, being happier together? If the only thing that makes a romance believable is a sex scene, I’m pretty sure we aren’t talking about romance anymore.

However, the book is kind and understanding when it comes to Holly. It and Leo never place Holly in a position where she is anything other than loved and cared for. Holly’s family are fully open and welcoming that Holly is homoromantic (she says lesbian for ease), and her brothers are beyond protective of her, ready to fight if someone Holly is involved with mistreats her for being asexual. And Leo is furious that anyone might belittle Holly for being asexual.

In the end, Perfect Rhythm is pretty okay, not great. Some choices were made that make it another Intro to Asexuality, but it was mostly a gentle book. And something I thought was great (strange to hear in an audiobook, but great), was a content warning before the chapter with the sex scene. I’m not asking every book to do this, but for a book with an a-spec character and likely to be read by a-spec readers, it was beyond considerate.