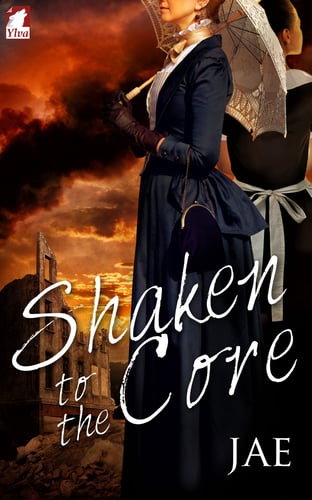 Kate Winthrop, the only child of a wealthy shipping magnate, has the course of her life charted for her by her parents. She’s expected to marry well and produce a successor to the Winthrop empire. But Kate has a very different path in mind. Her true passion lies with photography—and with women.

Alone in the city after losing her brother, Sicilian immigrant Giuliana Russo starts working for the Winthrops as a maid. Despite their different social status, Kate and Giuliana become friends, much to the dismay of Kate’s parents.

As the connection between the two women grows, a devastating earthquake hits San Francisco and ignites fires that sweep through the city for three days and nights.

Will the disaster shatter their tentative feelings for each other, or will they find the courage to save each other’s lives—and their hearts?

Join Kate and Giuliana on a journey of danger and discovery in the action-packed historical romance Shaken to the Core, set against the backdrop of the 1906 San Francisco earthquake.

Review: Shaken to the Core, by Jae

I really tried with this book. I’ve checked it out of the library two times this year (it’s only early February as I write this) to get to 30%, but I could not connect with it. I didn’t even get to the earthquake! If we’re telling the truth, I was here mainly for the earthquake, which I know is weird.

So, Shaken to the Core is set in 1906 San Francisco, weeks before the earthquake that destroyed the city. It’s a romance between Guiliana, a Sicilian immigrant, and Kate, a shipping heiress. As the book opens, Guiliana’s brother dies, leaving her with nothing, so she gets a job as a maid at Kate’s parents’ house. Meanwhile, Kate is a photographer who wants to be a photojournalist, but can’t get her foot in the door at a newspaper.

And I just could not get into it. There’s a touch of heat in that Kate knows she is into women and not men, and so she does ogle Guiliana a few times. Similarly, Guiliana also appreciates Kate physically, but does not understand what that means. When I stopped reading, there were ten days left before the quake and they were busy spraining ankles and eating Italian food in North Beach. My biggest complaint about this book is that there’s almost too much historical detail, which is an issue I had with Jae’s Backwards to Oregon too. There were pages dedicated to ordering the meal in North Beach, and, honestly, I barely have the patience when I’m ordering food. And I am typing this as I look at San Francisco from across the bay and the weirdness about reading a book set when the city is destroyed and an unknown number of people died has really hit home.