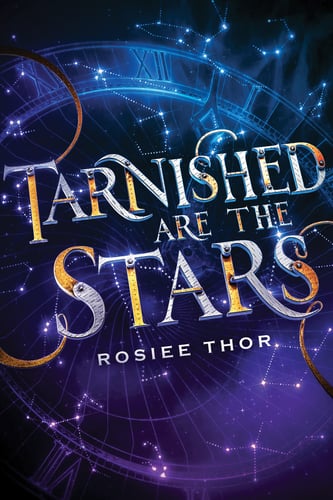 A secret beats inside Anna Thatcher's chest: an illegal clockwork heart. Anna works cog by cog -- donning the moniker Technician -- to supply black market medical technology to the sick and injured, against the Commissioner's tyrannical laws.

Nathaniel Fremont, the Commissioner's son, has never had to fear the law. Determined to earn his father's respect, Nathaniel sets out to capture the Technician. But the more he learns about the outlaw, the more he questions whether his father's elusive affection is worth chasing at all.

Their game of cat and mouse takes an abrupt turn when Eliza, a skilled assassin and spy, arrives. Her mission is to learn the Commissioner's secrets at any cost -- even if it means betraying her own heart.

When these uneasy allies discover the most dangerous secret of all, they must work together despite their differences and put an end to a deadly epidemic -- before the Commissioner ends them first.

Review: Tarnished Are the Stars, by Rosiee Thor

Rosiee Thor's debut YA sci-fi novel, Tarnished Are the Stars, is excellent. She combines several classic sci-fi themes, fresh environmental elements and a whole lot of Queer Feels to make an action- and emotion-packed story of oppression, grief, love and hope.

Earth has been rendered uninhabitable except for The Tower, where The Queen and her court live. The Settlement on Earth-Adjacent has operated as a test-colony for decades and now the queen is getting antsy. She wants to terraform the planet before she dies, so she can live forever in the hearts and minds of humanity. The only problem is that everyone living outside the settlement is sick, or Tarnished. Since technology led to the destruction of Earth, it's been banned for all but the administrators, who use it to communicate with The Tower.

Our protagonists are Anna, also known as The Technician, a rebel working to supply black market medical technology to The Tarnished and those in the settlement who need it. Her grandfather is a surgeon aaaaand he installed the "Ticker" that helps the Commissioner's son, Nathaniel live. Nathaniel was sick as a baby and needed this technology, so of course his rich family got it for him, even though they won't let anyone else have one legally. (Eat the rich.)

Anna and Nathaniel are joined by Nathaniel's fiancee from The Tower, Eliza, who also works as The Queen's Eyes. As an enemies-to-lovers romance develops between the two girls, all three of them must work together even though some of their goals are completely at odds. Yes, they all want to take down The Commissioner, but each for a different reason. And those reasons threaten to ruin everything.

A major theme of the book is how technology and science can be used for good or for bad. Everyone claims that tech ruined Earth, but it's clear that humanity ruined Earth. In this future and in our present, we could be using technology to prevent waste, to clean our oceans, to scale back on emissions and responsibly grow (or not) societies. Thank you, capitalism, for convincing us that progress and the planet cannot co-exist. The tech in the book is clockwork in nature, with the Tarnished needing new, artificial hearts that audibly tick and need maintenance. Anna has one, Nathaniel has one, Anna's surgeon grandfather installs one on page. But it's still forbidden and since it's only people who live outside The Settlement (the rich city) who need Tickers, there's a lot of subtext about class, race and healthcare. Should healthcare be a luxury, only for the wealthy? Should poor communities be left to fix their own water supply? *stares at Flint, Michigan* Or should the government use its power and resources to help?

Let's talk for a moment about all the Queer Feels. Anna is bisexual, Eliza is homosexual, and Nathaniel is aromantic and asexual. Nathaniel has absolutely zero proprietary feelings for his fiancee, but is happy to finally be making two friends, even if those friends try to stab each other all the time. His father is an abusive a**hole, so now that he finally has people in his life who care for and respect him, he becomes more confident and starts fighting for his beliefs. Anna is impulsive and charges into things, while Eliza sits by analyzing and scheming before she starts stabbing people. They also manage to ogle each other and be generally annoyed at their feelings. It's delightful. My one note is that it's Eliza who tells Nathaniel that there are words for his aro/ace identity, and I know that learning about one's identity from another person is sometimes an uncomfortable plot piece for aro/ace readers. It does not feel preachy. He's always known this about himself, but his rather is such a repressive jerk that he didn't get to explore anything about himself, nevermind his sexual and romantic orientation.

Tarnished Are the Stars stands alone and, though it wraps up quickly, I was thoroughly satisfied. There's a lot of grief and guilt on the page, so please read the content warnings linked below if you might not want a heavier book. If, however, you'd like to yell about class and race and the role of technology in the preservation of human dignity while also reading about two girls grudgingly falling in love and hugging a boy who really needs it,  this is the book for you.