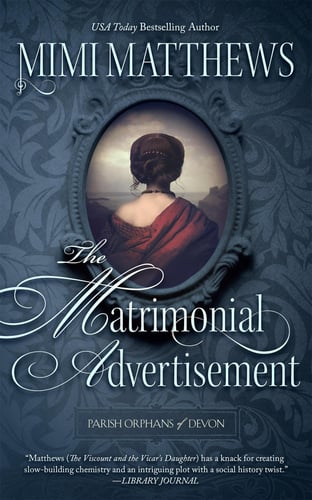 Helena Reynolds will do anything to escape her life in London, even if that means traveling to a remote cliffside estate on the North Devon coast and marrying a complete stranger. But Greyfriar's Abbey isn't the sort of refuge she imagined. And ex-army captain Justin Thornhill--though he may be tall, dark, and devastatingly handsome--is anything but a romantic hero.

Justin has spent the last two decades making his fortune, settling scores, and suffering a prolonged period of torture in an Indian prison. Now, he needs someone to smooth the way for him with the villagers. Someone to manage his household--and warm his bed on occasion. What he needs, in short, is a wife and a matrimonial advertisement seems the perfect way to acquire one.

Their marriage was meant to be a business arrangement and nothing more. A dispassionate union free from the entanglements of love and affection. But when Helena's past threatens, will Justin's burgeoning feelings for his new bride compel him to come to her rescue? Or will dark secrets of his own force him to let her go?

Justin did not expect any answers to the advert he - or rather one of his friends - put out to find a wife. He has enough money to live comfortably but he isn’t really rich, his home - Greyfriar’s Abbey - is far away from any big cities where anybody might find entertainment and he has no title to make up for these failings. When someone does reply he expects an elderly spinster who bolts when she sees his face that has been scarred in the war. But when he meets Helena Reynolds in person she’s young, beautiful…and tells him she can’t get married quickly enough.

What happens next is not very surprising to a romance reader. Justin is falling for Helena - but he has also figured out that she must have had some ulterior motive for marrying him and that she has no other reason for staying, and certainly couldn’t love somebody like him. Helena, meanwhile, is also falling for Justin but convinced that once he finds out why she was in such a hurry to get married he’ll despise her for having kept so much from him.

As a big fan of characters pining for each other and remaining oblivious to the other feeling the same, this delighted me, especially because the reasons they had for thinking the other could not, were believable and not some heavily constructed nonsense. Additionally, Justin and Helena were incredibly lovable characters and I was pretty much rooting for them to get a happy ending the first time they appeared.

Unfortunately, as much as I love pining, it did get a bit much and drowned out the plotline about Helena’s past. The reader finds out pretty quickly that she must be running from domestic violence (though the exact circumstances only become clear halfway through) and her experiences have affected her. She’s very reluctant to do certain things because for her they’re connected with very traumatic memories. But while her pining is almost omnipresent, her trauma only seems to come up when it becomes plot-relevant. When Helena thinks about her past she mostly thinks about it in the context of having lied to Justin about it and her worrying about his reaction to finding out. That she is affected by what happened to her, only comes up when e.g. someone asks her to do something that brings up bad memories for her. Then she panics and explains that she can’t possibly do that. In those cases I caught myself thinking “Oh come on, stop whining, just do it.” before reminding myself that she isn’t actually whining but has good reasons for her feelings.

So while it’s clearly not the type of book that gives a character a terribly tragic past just to make them more interesting and then fails to acknowledge how this would affect them, it doesn’t quite manage to convey that trauma is also present outside of concrete situations that remind one of it. I’m not saying that this book should have been an incredibly tense and angsty read, but I would have prefered some more balance between the portrayed feelings instead of one thing completely overshadowing everything else.

The Matrimonial Advertisement is the first in a series and Helena’s cousin and Justin’s childhood friend will be the focus of the next book. Both already had a small role in this book and were very charming characters and I want to read more about them. So while I had some reservations about this book, there was also a lot I enjoyed and I’m looking forward to the next one.