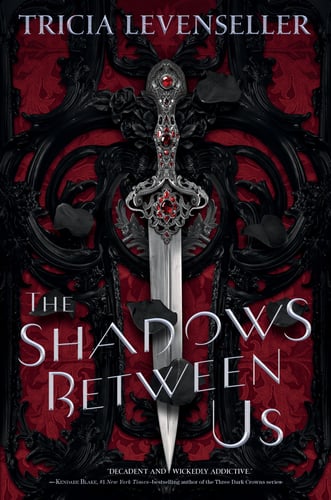 Tricia Levenseller, author of Daughter of the Pirate King, is back with an epic YA tale of ambition and love in The Shadows Between Us…

“They’ve never found the body of the first and only boy who broke my heart. And they never will.”Alessandra is tired of being overlooked, but she has a plan to gain power:
1) Woo the Shadow King.
2) Marry him.
3) Kill him and take his kingdom for herself.

No one knows the extent of the freshly crowned Shadow King’s power. Some say he can command the shadows that swirl around him to do his bidding. Others say they speak to him, whispering the thoughts of his enemies. Regardless, Alessandra knows what she deserves, and she’s going to do everything within her power to get it.

But Alessandra’s not the only one trying to kill the king. As attempts on his life are made, she finds herself trying to keep him alive long enough for him to make her his queen―all while struggling not to lose her heart. After all, who better for a Shadow King than a cunning, villainous queen?

Review: The Shadows Between Us, by Tricia Levenseller

A devious, sexually liberated young noblewoman sets out to play a game of f*ck, marry, kill with an equally terrible young king. They enter a fake courtship arrangement, murder some people and then live evilly ever after.

The first thing you should know is that neither of the main characters are good people. You just have to lean into the idea of rooting for the bad guys. The Shadows Between Us opens with the heroine talking about how she murdered the first and only boy who broke her heart. Despite the rule that "good girls don't," she's taken many lovers since then and blackmails them into silence. Once her older sister is married off, she decides to reach for the highest of positions - Queen. But the King doesn't want a wife and will lose his ability to shift into shadows if he's near anyone he's touched skin to skin.

Alessandra is a skilled designer and seamstress and quickly becomes popular at court.  She's a master manipulator, even if her schemes are nearly discovered at several points. The romance between the two of them builds rather slowly, with Alessandra being pursued by multiple other men and making lots of friends in the meanwhile. By the end, it's clear that she doesn't need Kallias but wants him. And while she might be a cartoon-level villain (Madalena from the delightful tv show Galavant), she gives up on the idea of killing him once she realizes they can be allies in conquest.

What makes them The Bad Guys? Well, they literally hunt down and arrest a Robin Hood character. Kallias has conquered six of the nine realms and has plans for the other three. Amid blackmail and dodging a murder conviction, Alessandra helps him come up with strategies to accomplish his goals. The reason we didn't list this book as "PG-12" (hi MPAA) is because of the violence. He kills people in front of her and then they just go back home and eat supper. Like I said.... lean in.

The world-building doesn't make a lot of sense. Characters use rapiers and have pistols. There don't appear to be sewing machines, but there's electricity and modern weaponry? There are still horses and carriages and taverns with wenches... but these other random modern things. It's inconsistent but I was able to ignore it. On the other hand, the court is comprised of people of varying skin tones and sexual orientations.

I tore through this book in two sittings. It's an angsty, dark fantasy romance that perhaps doesn't make sense in the Young Adult category but is nevertheless delicious.