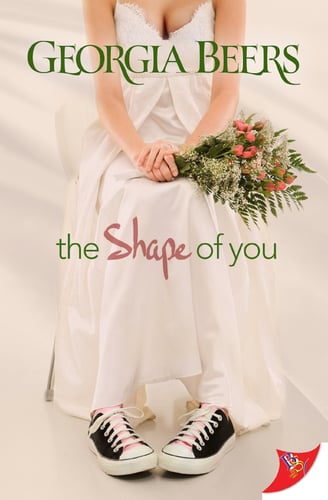 Personal trainer Rebecca McCall is furious when her coworker is sidelined and she’s forced to teach the “Be Your Best Bride” class. As if being a size two for your wedding photos is all exercise is good for. Could the whole thing get more vain and sexist? The class is full of preening, giggling Bridezillas, but one woman stands out. The one who confesses she’s only there because her fiancée signed her up. Who does that to someone they care about? And why can’t Rebecca take her eyes off her?

Spencer Thompson is a second-guesser. After making the worst mistake of her life, she’s happy to abdicate responsibility and let other people make her decisions for her. She’s always felt a little bit too soft, a little bit too curvy in all the wrong places. Her fiancée apparently agrees because she signed Spencer up for a class at the gym. Terrified by the online profile of the instructor, the epitome of Zero Body Fat, Spencer is relieved to find someone new, and realistic looking, leading the class. Except the instructor seems to hate her and Spencer has no idea why.

When a perfectly innocent post workout smoothie leads to an earth shattering kiss, Rebecca wonders if she’s been wrong all along, and Spencer is challenged to make another decision that could change her life forever.

Review: The Shape of You, by Georgia Beers

I am afraid that this review will be in two parts. First, I need it to be known that I was both excited and nervous about The Shape of You. No matter what genre, books are more often bad when it comes to fat representation, and I hoped for an outlier. Instead, I got more of the usual. I made it to 45% before I became enraged. The first part will be about the story, the second will be about fat representation.

Part One - A Case for Maybe Things Should Happen

The story is sort of simple. Spencer’s fiancee signed her up for a pre-wedding exercise class and Rebecca is the instructor of that class. Neither want to be there. Rebecca teaches the class because the usual trainer is sick, and Rebecca resents the idea of a class for brides-to-be to slim down pre-wedding. And Spencer goes to the class for reasons that include “I could lose a few pounds” and “it was a lot of money.” During introductions, Spencer tells the whole truth and Rebecca dislikes her for it because she assumes Spencer is a pushover.

When I say that nothing happens for almost 50% of the book, I am not exaggerating. There are fitness classes, Spencer does some planks, Rebecca is rude then not then cold then flirty, Rebecca goes on a date, Spencer makes a necklace, and then suddenly they make out. During this 50%, there has been a lot of internalizing “she’s so hot” going on, and then their control breaks and they have sex by 60%.

But wait, you ask, isn’t Spencer engaged? What happened to her terrible fiancee who told her to lose weight by signing up for a fitness class? Oh, well, Spencer is still engaged. So, yes, Spencer cheated and Rebecca is the other woman. Truth is that I don’t actually care about the cheating (except the fiancee should have been gone by 20%). I’m angriest about the fact that these two DO NOT COMMUNICATE. For weeks, Rebecca avoids Spencer and then they are making out in a bathroom. Maybe this is my preference, but I don’t read romance for characters acting on lust, I read it for the connection between people which includes communication. The biggest problem with this book is that everyone is unpleasant and no one talks about anything that matters.

Another thing to note: there are two characters with developmental disabilities and they felt like props to show that Rebecca and Spencer are actually good people, but I can’t speak to how they are treated and depicted beyond that.

On the advice of friends, I stopped reading at 60%. Under normal circumstances, I still would have given up by this point, but then the book just lingers in fatphobic microaggressions, so welcome to:

Part Two - A Case Against Fatphobia

The Shape of You is littered with fatphobic microaggressions (and some outright aggressions). With the first few, I thought I could be overreacting, but then they did not stop.

Important to note is that this book added romances with fitness trainers to my will-never-read-again list. Perhaps there are some lovely books that don’t sit in fatphobia, but it just isn’t worth the risk to me. And honestly, this book compounds why I think going to a gym when fat can be so difficult. There’s this argument about “don’t you want to be healthy?” that then gets coupled with people judging and the truth is that fat people can never win. Mocked if we do, demeaned when we don’t.

So, Rebecca, the trainer heroine preaches “fitness is about health not size,” but then she spends two meals judging what her best friend eats as wrong. The issue is less that her friend is having a hamburger and more that he has a bit of a belly and is eating a hamburger. And as a fat woman, I know that when I eat anything, people who watch me are asking if I shouldn’t order a salad instead. I hoped that Rebecca would not be a jerk trainer, and no matter how much the books swears she isn’t (isn’t she great with the elderly client? she’s so supportive to the other clients), Rebecca is a jerk and the sort of trainer whose kindness ends when you don’t meet her ideas of how you should be.

I will not lie, this book can be a hard read because there is so much focus on correcting bodies. I stood on my train wanting to scream because of how hard it can be to read someone point out flaws in another’s body. “You just need toning.” “Everyone should be at a gym.” And then, during sex, Rebecca admires the now toned limbs on Spencer as if that explains the attraction now. The thing is that I get the point, but also could not stop thinking about how all Rebecca did was judge Spencer and find her lacking while also thinking her hot.

Then, there is a point when Spencer starts taking spin classes with another trainer who mentions it to Rebecca. And of all things to say, the trainer says, “Your little blond cream puff was in my spin class this morning,” Rebecca replies with “she’s not my cream puff.” If I had not been on public transit at that point, I would have shrieked and taken banshee form. I suspect that Beers thought this was cute. I would even venture that Rebecca thinks this is cute. And this is one point where a sensitivity reader might have paused and said, “uh, referring to a woman with body image issues as a round, fluffy pastry filled with whipped cream is not cool, especially from her trainer.” Hell, anyone! Do not call people cream puffs unless you want to be punched in the throat.

Fun fact, for all the time the book spends focused on how Spencer is not thin, it’s important to note that Spencer is not fat. I know this because Rebecca says it so often and in such a way that it proves that being fat is a bad thing in this book. “She’s not fat.” “You aren’t chunky.” Each time it’s suggested that Spencer is fat, it’s immediately denied because obviously who could ever want a fat woman? And I had no room left to ignore this, no patience left to pretend I’m overreacting. There is no sensitivity to how body image issues are addressed in The Shape of You. It’s clumsy and hurtful.

All of this to say that I expected better. If you are looking for a recommendation for an author who does write fat women well, Olivia Dade (who is a friend) does this beautifully and thoughtfully in Mayday, Ready to Fall, and Cover Me.