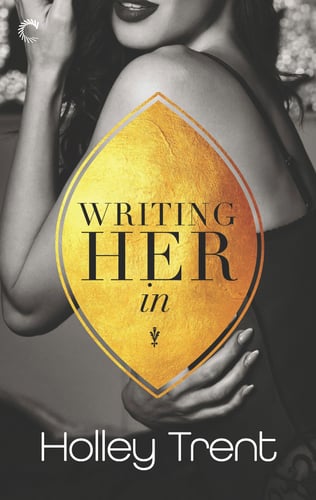 Review: Writing Her In, by Holley Trent

Two disclosures before I start this review:

2) There's a bit of a spoiler in the second paragraph but not really a spoiler? You'll see.

Writing Her In is a polyamorous romance with a married couple and a woman they both fall in love with. It is not a menage in a physical sense, but it absolutely is in a romantic sense. Adrien and Dara have been in love since high school. In her words, Dara's family is essentially a cult without the followers - her father is a religious tyrant and her family disowns her for being with Adrien. (This is the history of trauma referred to in the tags above. It's not depicted on page, but his emotional abuse is referred to several times.)

As you can tell from the blurb, Stacia is a writer and Adrien is the model on a few of her book covers. What you can't quite tell until the morning after Adrien and Stacia sleep together (with all three parties consenting) is that Dara isn't asexual. I worried for a bit at the beginning that the book would be a bit ace-phobic, but as far as I (an allosexual) can tell, the ways Dara's sexuality is described aren't harmful to people who are ace. Dara and Adrien tried to have sex a couple of times and it just never really worked for Dara. She doesn't know why, but Adrien isn't an a-hole about it. They have a deep and true love, and Dara encourages Adrien to sleep with Stacia.

So what happens the next morning? When Adrien has left for work and  Stacia is doing the awkward morning-after shuffle... Dara finds herself sexually attracted to Stacia. What follows is two complicated character arcs for the women and a more straightforward arc for Adrien. I don't want to spoil anything else for you, but let's just say Dara figures some things out that her restrictive religious upbringing didn't teach her, Stacia learns to receive love, and Adrien continues being a sexy marshmallow.

Now for the part where I blubber my feelings onto a digital page. Writing Her In is one of those very niche books that appealed to me for about a million reasons, but mostly because of the way Trent writes Stacia and Dara together. Adrien is lovely, yes, but he's just sort of there. He's not the star of the show and WOW am I tired of f/f/m that's really f/m/f. This book puts the women and their needs front and center, rather than the 1,000,000 porn and erotica plots that are not-even-thinly-veiled male power fantasies. Dara is biromantic and homosexual (and possibly also demisexual, she doesn't use the words) and she's allowed to be herself. Adrien just rolls with it. There's no "big scary reveal" scene, and the conflict mainly comes from Stacia worrying that she's extraneous to their relationship - that she'll be left behind.

So why was I crying while reading both the digital copy (provided by Carina Press) and the audiobook (thank you, public library/Hoopla)? Because Holley Trent wrote a triad that managed to not be fetishistic or queerphobic or unnecessarily harmful in any way.

None of this is to say that I loved this book simply because it didn't do bad things. It does a lot of wonderful things and they made my queer-but-not-visibly-so heart very, very happy. Stacia and Dara (and Adrien, fine) are complicated characters who start out in a good place and end in a better place. (There's also some very excellent f/f sex.) I could see myself in all three characters, and not even just the pieces I don't like. It was like a very sexy hug of a book, and I'm possibly going to go read it a third time now.