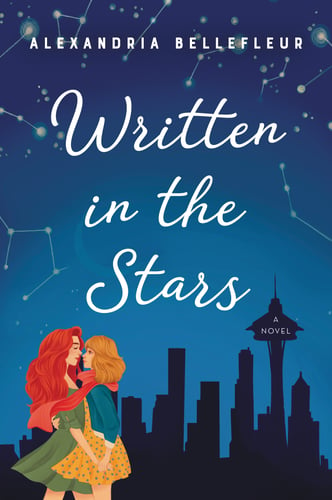 With nods to Bridget Jones and Pride & Prejudice, this debut is a delightful #ownvoices queer rom-com about a free-spirited social media astrologer who agrees to fake a relationship with an uptight actuary until New Year’s Eve—with results not even the stars could predict!

Elle Jones, one of the astrologers behind the popular Twitter account Oh My Stars, dreams of finding her soul mate. But she knows it is most assuredly not Darcy... a no-nonsense stick-in-the-mud, who is way too analytical, punctual, and skeptical for someone as free-spirited as Elle. When Darcy’s brother—and Elle's new business partner—expresses how happy he is that they hit it off, Elle is baffled. Was Darcy on the same date? Because... awkward.

Darcy begs Elle to play along and she agrees to pretend they’re dating. But with a few conditions: Darcy must help Elle navigate her own overbearing family during the holidays and their arrangement expires on New Year’s Eve. The last thing they expect is to develop real feelings during a faux relationship. But maybe opposites can attract when true love is written in the stars?

From the outside, Elle and Darcy appear complete opposites. Elle is a free spirit and one half of an astrology company and Darcy is a buttoned-up actuary. (Literally, there is a scene with undoing buttons. *fans self*) But  inside are two women who are afraid of relationships. This fear leads them to some fake dating, so it's all good in the end.

Bellefleur's debut is as sparkly as the stars Elle lives by and the glitter in her hair, but it's also grounded by the development of trust and respect. It's not fluff and it's not angst, it's the sweet spot in between.

One note: I read this on audio (courtesy of the publisher) and I would have preferred a different narrator. Since it's one narrator voicing both characters' POV, it takes a certain skill-set to make the characters feel different from one another and I don't think Lauren Sweet pulled it off. Her narration is also very slow, so I listened at a faster speed than usual. That said, the book is good enough to make up for all of this and Bellefleur's writing is clear enough that I could always tell which POV I was in.

If you're looking for a fun, romantic, slightly P&P story, Written in the Stars is a great pick.

Content Warnings: past cheating, strained family relationship, mentions of past death of very-important grandparent, past death of parents, secondary character is pregnant

I received a (temporary) copy of this audiobook from the publisher for review.