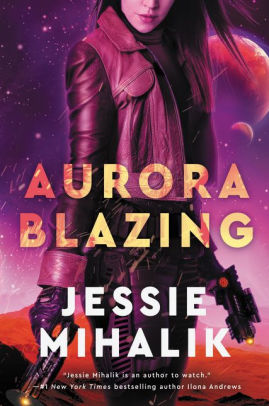 The two have an adversarial relationship at the beginning of the book. Ian is upset that Bianca is always causing trouble for the family and making his job as head of security for the von Hasenberg family more difficult. Bianca hasn’t forgiven Ian for spurning her the one time she came on to him before her disastrous marriage. But of course, Ian has a rocking body and is a brooding hero, and Bianca cannot resist. Even though she’s not keen on traveling the universe with him, she’ll make do with the view. They’re united in their goal to find the von Hasenberg heir and because of that, their relationship softens. I love that these two start as enemies and the drama of Bianca’s brother going missing along with the close confines of a spaceship make the two grow closer as colleagues and lovers.

Mihalik writes a character I’d love to see more of in SFF and Romance - a heroine who doesn’t need “fixing.” We learn early on that Bianca is not only a computer genius, but she’s able to “hack” into electronic communications with her mind. It is a power she didn’t ask for, as this was a gift given to her against her will. The story doesn’t revolve around finding ways to fix what’s been done to Bianca so she can have her HEA. The experiments have been done and there's no undoing them. While this ability causes Bianca chronic pain and headaches, she has learned to use it and adapt to her circumstances and grow from her tragic past. Ian supports Bianca and helps where he can, but he’s never there to fix her. Their romance develops because of their past attraction, not from a need to heal her with his magical penis.

I missed out on Polaris Rising, and now I need to go back and read it ASAP. I didn’t feel I was missing any substantial plot points by not reading the first book, but I probably would’ve been more excited to see Ada appear with her partner in Aurora and would have understood the overall House intrigue that was happening to the von Hasenberg family if I did. In a way I’m sad that this is only planned as a trilogy, because I know all my questions about the von Hasenberg family and their feud with the other houses won’t all be answered. If this is your first Consortium novel, I think you’ll still enjoy it without knowing what happened in Polaris. But I guarantee that when you finish, you’ll want to run back and read the rest.

Amy received a copy of this book from the publisher via Edelweiss.