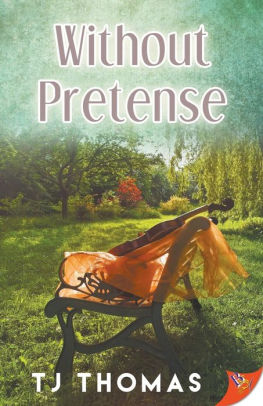 Review: Without Pretense, by TJ Thomas

When taking a break from her practise, violinist Ava Wellington runs into a very attractive woman. The two form an instant connection and the woman – Bianca – talks about her wife who died in a plane crash. Ava then has to continue her concert tour and never hears from Bianca again, but she can never forget that meeting. Two years later her manager ambushes her with the announcement that he has hired someone to write Ava’s biography, even though she has repeatedly stated that she doesn’t want that to happen. When the writer turns out to be Bianca, Ava is torn between happiness about seeing her again and fear that she will uncover the secret that’s the reason Ava doesn’t want anybody to know.

The reader learns that secret (or part of it) quickly: Ava got pregnant at 15 because a condom failed and gave the baby up for adoption. Since she is a celebrity, she worries that the story getting out would also drag the child, the adoptive parents and the biological father in the spotlight, who, after all, did not sign up for that. Besides, Bianca lost not only her wife but also their unborn child in the crash and Ava worries that Bianca - who so wanted a child and then never got to meet it - would judge her for simply giving up hers.

That could have made for a cute story with low angst and mostly internal conflict: Ava dealing with her own wants and needs versus those of the people she cares about and Bianca overcoming her grief and dealing with the fact that she’s falling for the person she’s supposed to be writing about. Unfortunately, any promise the story has is overshadowed by the prose which is just plain bad. There’s no getting around it. There are no unique - or even distinguishable - voices. It doesn’t matter who is talking (or giving page-long internal monologues about their feelings). It doesn’t matter if they’re making light-hearted banter or discussing serious issues. Everything and everybody sounds the same. When Ava laments how much she worries that Bianca discovering her secret would ruin her relationship she sounds no different than when she tells Bianca that she just had a really mind-shattering orgasm. And that sounds no different than Bianca talking about her family or any side-character telling stories about Ava.

We also get gems like this, when Bianca asks one of Ava’s friends how he met her:

“It’s quite embarrassing really.”
“Why is that?”
“Well, it involves a reality television show called Salon Wars, a hair dryer, and a dumpster.”
“I’m all ears.”
By the time Steven had finished his story, Bianca was laughing so hard her sides hurt.

No. We never hear that story. But we’re told that it’s hilarious. Just like we’re told that Bianca feels extremely moved by Ava’s music. Or that Ava feels different about Bianca than she did about all her previous one-night-stands/short term relationships. They just have this special connection. At least that’s what we’re told. We’re never shown anything that would make me believe any of those things. When Bianca watches Ava perform we get an exact description of the clothes Ava wears on stage, followed by “The music she played was lovely. Tender and heart wrenching. Bianca felt like she was playing all the emotions she had shared that afternoon.” and another paragraph full of sentences starting with Bianca felt but not what any of those emotions are doing to her. And that’s the approach to everything in the book. (The sex scenes boil down to And then she did this and then she put her hand there and then she had a mind-blowing orgasm, which is not very erotic).

I really can't recommend this book. With all the telling instead of showing none of the characters felt real. They were cardboard-cutouts I didn't care about.

Eva received a review copy of the book from the publisher via NetGalley.