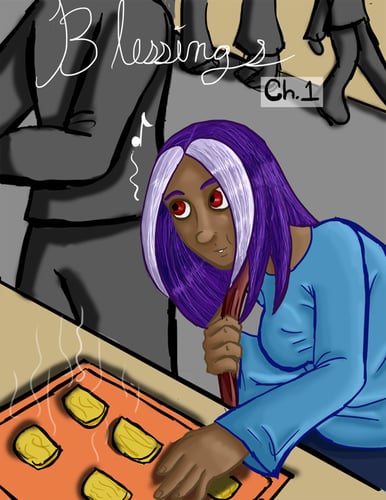 Three kids make an ill-advised (but well-intentioned) deal with a demon in the woods one day. Twenty years later, Levi, Rowan, and Alder meet again to find out their past has caught up to them. But a lot changes in twenty years, and they aren’t as innocent as they used to be.

In the vein of Nimona and Dragon Age, this character-driven comic by Keezy Young is a queer, modern take on the fantastical. Prepare for an adventure with your new found family.

Yellow Hearts is a comic about three people who met first, briefly, as children, and accidentally made a deal with a demon. Now, as adults, the demon has drawn all three of them back together, so that it may repay it’s debt to them. As children, they seem to have given it permission to have friends, to mimic humanity, and now the demon wishes to repay them with a single wish.

The story picks up in earnest years later, when coincidence again brings them all back to the same city where the tale started. We’re able now to see who they’ve grown up into, how the demonic pact (and subsequent flight) event affected them, and even how it affected the demon they made a bargain with. The three main characters come from distinctly different walks of life - a noble city guard and self-styled coward (Alder), a grifter (Levi), and a necromancer of some sort (Rowan). As the story progresses, each of them seems to be grappling with their past. It’s vague, but there’s enough detail that I’m confident the author has a definite direction. Alder and Levi are also in the beginning stages of a attraction to one another, despite the fact that queer identities seem to be frowned upon in this world.

The three (or four) main characters share a bond in that they’re genuinely good people in a world that doesn’t make room for them. I believe this bond will carry them forward to eventually triumph, though the main enemy right now seems to be their own fear of the unknown. Demons are not to be bargained with, but they made a deal with one, in good faith, before they even knew it was a demon. There's enough doubt in the world's religious texts that I don’t think the demon is evil.

The artwork is mostly thin lines with flat colors, but it does a great job pulling the reader in and conveying the emotion of the characters. Individual pages are made up of similar hues and tones, in a way that reminds me of the artwork of Bill Waterson (of Calvin & Hobbes), surprisingly enough. It is certainly less cartoonish, but the palettes evoke the sense of adventure in a prehistoric T-Rex or Spaceman Spiff comic.

Fans of fantasy comics will enjoy this one. We're looking forward to reading it as the story develops.