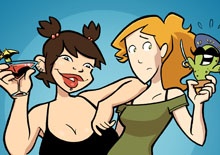 You can buy all the books there, too.

Girls With Slingshots debuted on October 1st 2004, both online and in stapled-paper form at SPX in Bethesda, MD. Since its humble beginnings as a twice-weekly black-and-white webcomic, it became a self-sustaining color webcomic that updated five times a week, Monday through Friday.

The strip's two main characters, Hazel and Jamie, sprung to life in a strip called Hazelnuts around 1996, an unintended prequel to GWS. The GWS title was based on a recurring request Danielle used to get at comic conventions to draw a girl with a gun (she sucked at drawing guns, so she drew them with slingshots instead).

GWS has been collected into ten books containing 200 strips each, which are available through TopatoCo. A hardcover collection of all of the strips (plus some bonus material) in color will be available in late 2017/2018.

This isn't a "romance comic" so much as a funny, heartwarming, slice of life comic that features romantic happenings as much as any human life might. It's on this list because romance readers will like it.