Buy it from the creator.

DAR! chronicles the six year long autobiographical story of Erika Moen, a lost 20-year-old lesbian artist-wannabe in college who falls in love with a boy in England and the evolution that her sexual identity undergoes before winding up marrying him as a queer 26-year-old full-time cartoonist. Along the way there are many vignettes about sex, farts, the queer community, the Brits, vibrators and figuring out sexual identity.

From Sarah's site: A story of two guys from different roads of life. Jasper prefers growing flowers over pastries, while Damian is a young musician with a dream to perform on stage. By chance the two cross paths at a bus stop and they start to become friends. 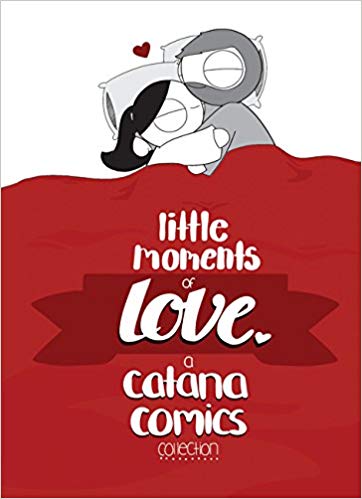 Little Moments of Love is a sweet collection of comics about the simple, precious, silly, everyday moments that make up a relationship.
What began as stray doodles on scraps of paper became an internet sensation when Catana Chetwynd’s boyfriend shared her drawings online. Now, Catana Comics touches millions of readers with its sweet, relatable humor. Little Moments of Love collects just that – the little moments that are the best parts of being with the person you love. 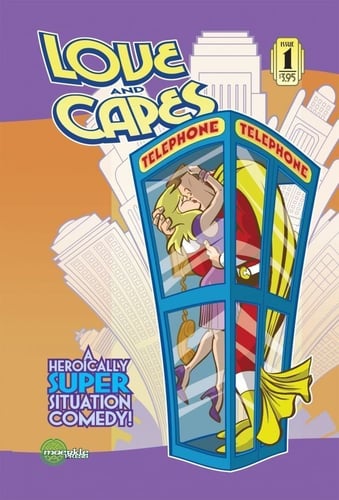 Read the Webcomic and Buy from the Creator

From the "About" section at Love and Capes:

Abby always knew he was a good guy. She just didn’t know how good.

"I’ve always liked superheroes, and I’ve always liked romantic comedies," says Zahler. "It was kind of a peanut butter and jelly moment. The ideas just started flowing after that." Zahler says that he was a fan of the cancelled "Lois and Clark" TV show. "It had its moments, for sure. But I found that I got bored whenever Superman showed up. Maybe it was that they didn’t have a handle on the superhero elements, or that the effects budget always showed. But the Lois and Clark moments were great. A friend of mine and I decided the best episode ever would have been the two of them locked in an elevator, and he can’t get out to change."

So "Love and Capes" is two characters in an elevator?

"Not exactly. But most of the actual super-heroics take place off-camera. I think it’s important to treat the hero stuff seriously. I figure it’s kind of like ‘Friends’. Ross was a palentologist, but you rarely saw him palentogate, so to speak. So while Mark is the Crusader, you don’t see him do super-heroics very often." Can you write a whole super-hero book sans all the super-heroics?

"Absolutely. I figure a super-hero/average Joe (or JoAnn) relationship is like dating a rock star or a model. There’s a lot of conflict between those two lifestyles. That conflict’s the heart of the book. How do you deal with your boyfriend when he’s walked on the moon without a spacesuit and dated Wonder Woman? And, conversely, how do you have a normal relationship when you might get called away to save the world? There’s a lot of funny there. I intend to find it."

Alright, they don't have a "summary" posted on the site so here's my best stab at it so far.

Love Circuits started releasing weekly pages in February 2017 and is one of the cutest things I have ever seen. Our main character, Noelle, has just broken up with Javier (her fiance) and a friend sends her a robot boyfriend (Lucos) for her birthday. She's bilingual, has an artificial lower leg, and lives with a robot service dog who does not seem to be a fan of Lucos. The comic is pretty short so far, but I love what I've seen. The background art is gloriously detailed, from the rain in one scene, to a busted open piñata spilling dildos on the floor in another scene. Noelle clearly had an excellent birthday party. Despite the party favors, the comic has so far been stayed away from sexual, violent, or nude content.

It is 17th century France, the age of discovery and scientific revolution. Sulvain, a mysterious traveler, is absorbed in the Parisian academic scene. Through his friendship with the renowned Christiaan Huygens, Sulvain has the chance to study the latest discoveries of the distant cosmos. Deep in the library of Academy of Sciences, however, our traveler will meet Huygen's apprentice--Raziol Quamar--who will truly spark new lights in Sulvain's universe. But as the two grow closer, trouble brews in the city.

NOVAE is a beautiful comic. As of this writing, KaiJu has released two full chapters/issues and is part-way through a third. I would have kept reading this all day had I not run out of content. It's that kind of lovely.

I have a limited knowledge (and interest, tbh) in astronomy, but the building relationship between Sulvain and Raziol has got me hooked. Sulvain is mute, leaving the two to supplement their written conversation with a lot of facial expressions and touch. Long glances, subtle blushes, awkward excuses... it all rings true.

The story so far is centered around Raziol's study of Saturn's rings, a presentation, and a stargazing interlude. With humor, mystery, and a hint of something magical, this story will draw readers in and keep them there. 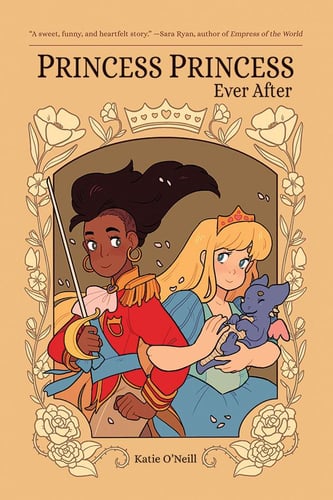 When the heroic princess Amira rescues the kind-hearted princess Sadie from her tower prison, neither expects to find a true friend in the bargain. Yet as they adventure across the kingdom, they discover that they bring out the very best in the other person. They’ll need to join forces and use all the know-how, kindness, and bravery they have in order to defeat their greatest foe yet: a jealous sorceress, who wants to get rid of Sadie once and for all. Join Sadie and Amira, two very different princesses with very different strengths, on their journey to figure out what “happily ever after” really means--and how they can find it with each other.

Quick note to say that we've rated this as PG13 because that's as low as we go BUT it's really an "all-ages" comic, recommended for 3rd grade and up.