The SS Odysseus was a long term, long distance research vessel tasked with finding alien life. Technically, the mission succeeded when, 20ish years into the mission, the astronauts– Kay Chalabi, Latoya Monroe, and Nike Marmaledov– were woken from cryosleep and were immediately kidnapped by aliens.

Before they could be sold off to the highest bidder (or eaten) the crew were rescued by the Argo; a sentient-ish ship with a motley crew.

The crew: Fuzz, the foul mouthed Furby-looking engineer, Tachs, the four-armed HR rep, Dr. Worm, a doctor who is also a worm, Charli, the teaching robot with calculated control over her emotions, Vee, last dude in the universe with a tragic backstory, and finally Captain Samira Doshi; morally ambiguous space pirate captain with a heart of gold and indisputable leader of the ship.

Now they all travel from place to place, trying to solve the mysteries of the universe: why are we here? Is there common ground between species? Why was humanity wiped out? And can you make bonds with people who don’t have your past– just your present? 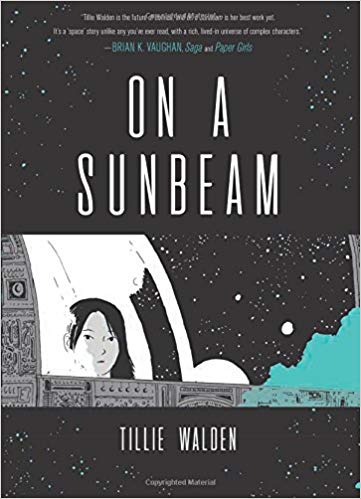 A ragtag crew travels to the deepest reaches of space, rebuilding beautiful, broken structures to piece the past together.

Two girls meet in boarding school and fall deeply in love―only to learn the pain of loss.

Tillie Walden has written a GIANT queer space opera that manages to be quiet and tense at the same time.

The story is told in two timelines, past and present, with a corresponding color change. The worldbuilding is fascinating, with the characters traveling through space to rebuilt various historic sites. The character development is also detailed, and though it's a little hard to sink into, with so many characters and two timelines, the payoff is worth it.