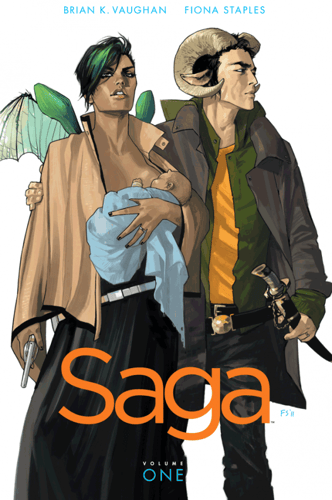 Most comic shops and a lot of bookstores are carrying Saga these days. Buy it from them!

Saga is an epic space opera/fantasy comic book series created by writer Brian K. Vaughan and artist Fiona Staples, published monthly by Image Comics. The series is heavily influenced by Star Wars, and based on ideas Vaughan conceived both as a child and as a parent. It depicts two lovers from long-warring extraterrestrial races, Alana and Marko, fleeing authorities from both sides of a galactic war as they struggle to care for their newborn daughter, Hazel, who occasionally narrates the series.

Saga is overwhelmingly popular for a reason. It's really damn good. It is romantic, depressing, gross, terrifying, hopeful, impressive... The characters are as diverse in personality as in our world, but the settings are nothing short of fantastic. It's Romeo & Juliet on an interplanetary scale. It's great, and I think everyone (above the age of say 16) should read it.

As for romance, Alanna and Marko are the central couple, and readers have seen them fall in love, fall out of love, be separated by space and time... and we're not done yet. I'm not calling this "definitely a romance" simply because theirs is more of a love story, rather than following a traditional romantic arc. Secondary romances abound, representing the full spectrum of beginnings and endings.